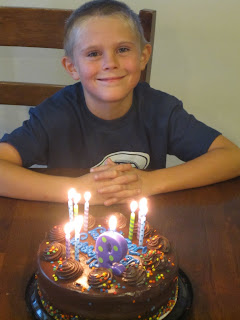 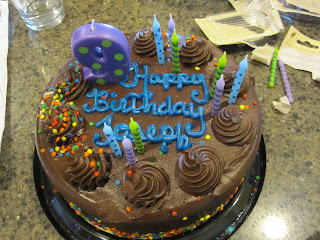 Yes he is 9! Happy Birthday Joseph!

This year Joseph has been asking for wiffle balls. He asks often because every time he gets any he manages to hit them on the roof of our neighbors within minutes of taking them outside. A new rule has been set that if you want to bat the balls, you must do it at the park. Our yard is great for playing catch, a full game of ball, not so much! (I asked someone at Walmart where the wiffle balls were located, she didn't know what they were and even after describing them she looked at me like I was speaking jibberish. Seriously, who doesn't know what a wiffle ball is???)

The sweet amazing nurses taking care of Aaron today made the sweetest sign wishing Joseph a happy birthday that they had Aaron hold. They took a picture and sent it to my phone. I am in the process of getting that onto our computer (Steph can you email those to me????). Aaron had both eyes open today and so the picture taking has once again commenced and the nurses wanted to include Joseph in the excitement! (more on that later)

Joseph has been a great big brother, especially to his newest one. Joseph is constantly asking about Aaron and prays for him several times a day. He does stir up mischief but always wants to make sure others are happy. He is a top notch negotiator. Last year in the ER when the nurse needed to give him an IV he demanded that she wait until all his arguments for not getting one were exhausted. He had several!!!

We love you Joseph and hope you have a wonderful birthday even in the midst of all our chaos!

Posted by bjarnason family at 6:49 PM

Happy Birthday to your Joseph!

Happy Birthday Joseph, we love you!

Happy Birthday Joseph!!! We love you! I remember how teeny tiny you were the first time you came to visit us in Turlock...and now you're NINE. My boys are lucky to have an older cousin like you. Hope you had a fantastic bday.

Happy Bday from the Stensons! I can't believe how big you are! Hope you had an awesome day! We miss you.