Many of you have asked about our card making experience and how to get in on the action. So here's what I have learned:

The card making opportunity that we did is now closed. I checked it last week. They only had slots for 100 families and they went fast. My suggestion for you is to go to Disney.com and click on the Give a Day Get a Day link. Register you family and put in your zipcode or a zipcode near you. We were limited on what we could do as we had a 6 year old helping and we wanted to do something quickly as our plans were to go this last week. You have to be flexible and as soon as you find something that works for you don't wait to jump on it as they always fill fast and you can always cancel if it turns out you can't make it. After completing the service it can take up to 2 weeks to get your vouchers through email so keep that in mind.

Good luck and have fun!

Posted by bjarnason family at 8:14 AM 1 comments

Give a Day, Get a Day 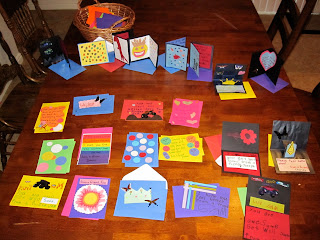 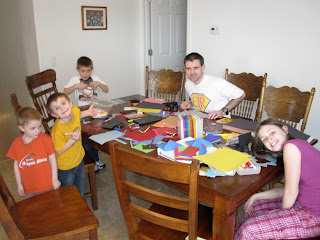 With the kids on a year round school schedule and with all the new changes at Ronny's office, trying to plan a family vacation this summer quickly became difficult. After checking all the calendars and deciding what conferences Ronny should attend we decided to take a few short trips as a family this year. Once that was decided, Ronny and I began throwing out ideas on what to do. We had talked a few times about taking the kids back to Disneyland now that Ben is old enough to ride on things so we decided that was going to be our first adventure.

I'm sure many of you have heard of Disney's new ad campaign of give a day of service and get a day at the park. We thought it would be great for the kids to "earn" one of their tickets so I looked into it. With us wanting to go this month and trying to find something we could all do together made matching us to one of their sponsored service events a little difficult. First off we found that Ben was too young to participate so that would change things up too. Then a friend pointed us in the direction of a hospital in Illinois looking for people to create "Get Well" cards for their patients. I quickly signed us up for that and we were "matched" by the website. They asked for people to make 10 cards each or 25 per family. We didn't think 25 was enough to earn tickets for our whole family so we decided to make a few more.

We quickly found out that making cards ourselves was no big deal but helping the kids took a significant amount of time which is why they ask for only 25 per family. In the end Ronny and I made 10 or 11 and the kids each made 5. This gave us a total of 36 which took us about 4 hours. We really had so much fun making these together and the kids did a great job. We loved that the kids earned their tickets by serving others and the teaching moments this brought along the way.

Posted by bjarnason family at 7:08 AM 8 comments 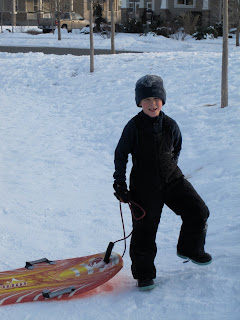 Joseph decided Papa was having all the fun at the ER these last couple months so he decided he wanted to go investigate the new hospital that just opened a couple months ago. Well, him deciding wouldn't be accurate, his asthma however decided to flare and make a winter appearance which resulted in the visit to the ER. This new hospital is a Primary Children's addition and is just around the corner from us. We walked in around 10:30 p.m. and was in a room within about 15 minutes. Pretty speedy service I would say, then again a child with respiratory problems usually speeds up the process.

They took his picture at sign-in which is new for us and the triage nurse was great. The doctor was excellent and checked everything, even ordering chest x-rays to make sure pneumonia wasn't setting in. Joseph loved the wheelchair ride and the x-ray tech was lots of fun. They gave him a new steroid that has shown to help both asthma attacks and croup, which is what he was presenting with at the time, as opposed to our usual stand by steroid of prednisone. However, its side effect is hyperactivity and combined with the Albuterol that we gave him before going to the hospital which also causes hyperactivity you can imagine Joseph was buzzing. Normally we can handle this but at 1 am its a little hard when you are trying to calm him down to go to sleep once we got home. The doctor wanted to keep him for a few hours to monitor him but with us just living up the street and it being so late we opted to go home. His O2 stats were good and we've been doing this for some time now that we felt we could handle things at home once the steroid was taken so the doctor gave us the choice.

This is his first trip to the ER this winter which is a marked improvement over last year. I think by this time last year we had at least 3. This is surprising considering how many germs we've picked up this year from school. We credit this to being away from the mold in OR and that he's on two different asthma drugs this year. It would just be nice if his asthma attacks would show themselves during regular office hours during the week and not in the middle of the night and usually on weekends. Doesn't it understand we're trying to live on a budget??????

Posted by bjarnason family at 10:05 AM 1 comments