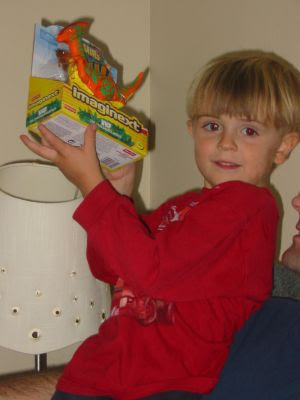 Friday was Sam's 4th birthday. He was so excited for this day. He asked every morning this week if today was his birthday. This was a birthday of all things dinosaurs, including the cake. Sam had 3 friends and their families come over for cake and ice cream. Then he opened his presents and it became a dinosaur feeding frenzy. They all had fun playing with the dinosaurs and putting together the puzzle. It was a great day and Sam enjoyed it which made all the time the cake took worth it. 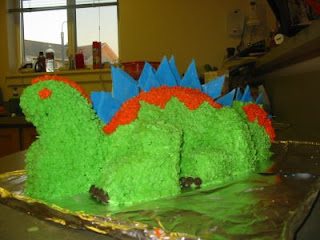 A friend of mine came over and helped me put this cake together. She piped almost the entire thing green herself before having to leave. She was quick! Start to finish it took about 2 1/2 hours including baking the cake to put this together. I found the instructions online and jumped in with 2 feet. We had a lot of fun putting this together. Now we are on the hunt for a fun cake for Charley. Any ideas? 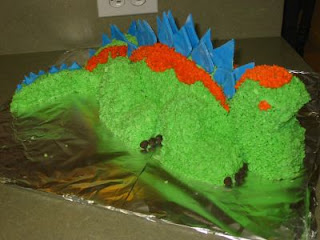 Posted by bjarnason family at 10:08 AM 3 comments

This has been an extremely busy week at our house with all the activities going on in our kids schools. I was thinking the other day, trying to figure out why I felt like all I was doing was running from one place to the next. It then occurred to me that I had 3 children in 3 different schools. Am I crazy or what?

Wednesday we did our annual family pictures. We decided to venture out and get some pictures that tied in our community a little bit. We went to an iron structure on campus, the dinosaur bones play area, and the old train at a park here. The kids were less than cooperative so we are hoping for at least one good picture to come out of our adventure. Our friend and amateur photographer obtained a new camera recently and is going to cut and crop them and put them on disc for us. We are anxiously awaiting the disc. I'll post a couple when we get it.

Sam's preschool went to the pumpkin patch yesterday. It was great fun and as Joseph has afternoon kindergarten he and Ben were able to tag along. Unfortunately that means my hands were too full for a camera. A friend of mine came with hers and took some great shots so if I can get a copy or two from her I will add them later. Now this pumpkin patch is a keeper. It has old hand water pumps set up to have rubber duck races, a corn cannon, chickens (always a favorite), dried corn bins to jump and dig in, a great tractor ride to the pumpkins themselves and 3 different kinds of pumpkins to choose from (orange, green, and white). They also let you pick out whatever pumpkin you want for the same low price of $2.50 This works out great when your kid chooses the biggest one out there which is what the kids did the first time we went with Joseph's class. This time however Sam had to choose the smallest one there that fit in my palm. It wasn't worth the battle of having him put it back and choose another so we just went with it.

Joseph and Sam had a friend come home from school to play later that day. We decided to paint our small pumpkins instead of carve them and make paper airplanes. They thought this was great and I had them gated in the kitchen to make sure paint didn't make it out. However after two hours of complete chaos of having 5 worked up boys and throwing planes everywhere and one girl who had a tough day at school I was beat!

Posted by bjarnason family at 8:05 AM 0 comments 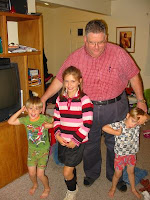 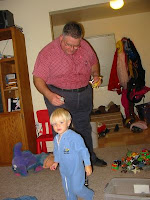 Papa came to visit this week. The kids anxiously awaited his arrival on Thursday and were very excited he came to spend some time with them. Ben warmed up to him very quickly and he and Sam enjoyed playing animals with him. He also took the kids outside and played catch with Joseph and his friend Tyler, soccer with Sam, watched Ben sit in his toy car, and went to Charley's soccer practice. He then took us all out to Izzy's Pizza Buffet. The kids enjoyed every minute of it. Ben affectionately calls him KaKa and the next day walked around the house saying "KaKa uhoh" meaning where did he go. Sam also was a little teary when Papa left and did not come back the next day and is now begging to go to Papa's Barn.

Papa left the kids Border's gift certificates which they spent the next day. Sam picked out a dinosaur book, Joseph a baseball book, and Charley picked out two new chapter books one about fairies and one about the Underground Railroad. 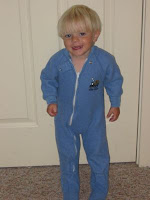 This last picture is of Ben, every time we pull the camera out Ben runs to the closet door and waits for his picture to be taken. Its hilarious! 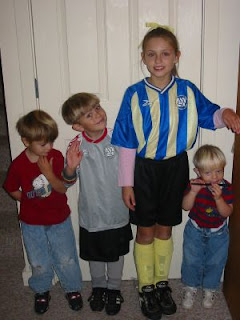 I have been meaning to blog about the kids playing soccer but just haven't had the time, but today I have committed to catch up! So Charley and Joseph are both playing soccer this year. Ronny volunteered to be Charley's coach and its clear he is the more excited of the two! Ronny researches drills and stays up late figuring out the roster for game days, and pleads to buy more equipment. It won't surprise you that Ronny spent a good portion of his birthday money on more soccer balls for the team.

Charley's team is so much better than last year. So far they are 2-1-1, I don't think they even tied a game last year. Charley is much happier that her team is doing better and scoring goals for a change. She is a true team player and her skills are definitely improving. Charley is also learning the art of "shaking it off"!

The first game of Joseph's we quickly discovered the difference between boys soccer and girls soccer. These 5 year old boys push and shove and all fight for a piece of the ball. They rarely complain about an injury and after being tackled by the pack quickly jump up and dive back in. He has one little boy on his team that is truly amazing. In their last game he scored 5 goals in 3 minutes which meant he was pulled to let other kids get some action and give the other team a shot at scoring. He also has a boy on his team who gets mixed up about which way to shoot the ball. Its a riot to watch these kids!

Joseph scored a goal yesterday. We were all very excited as Joseph typically hangs out on the outside of the pack and waits for the ball to pop out. Yesterday however he was much more aggressive and held his own in the pack.

I have to say that I have dreamt of this time in my life that I would officially become a Soccer Mom. I love it! 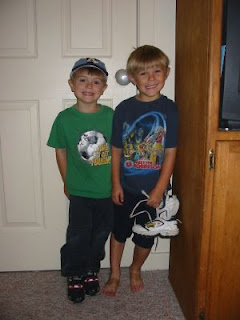 Sam started preschool this last Tuesday which also happened to be Ronny's 33rd birthday. Sam was so excited to start school. He seems to have mixed feelings about it now. He had a great first couple of days with only a few hiccups, however he came home on Friday and told me he cried at school and wanted to come home but his teacher said no. He loves riding the bus with Daddy and loves that his friends are with him at school. He also has a mental health aid that is assigned to him and other kids in his class to help with transitions. The aid certainly helps quite a bit and Sam comes home tired which tells me he is thinking and playing hard at school.

The week before school started Sam was officially diagnosed with ADHD. Everyone seems to have an opinion about this, which is sometimes helpful but mostly not. I have begun researching this and have learned a great deal. Sam's child psychologist is not as helpful as we had originally hoped for. Although she is very kind and a great listener she does not have very much experience with what we are dealing with: a 3 year old, multiple children, and life in general with a child with ADHD to name a few. Textbooks can only take you so far, life seems to be a more direct and sometimes harsher teacher. We have begun different behavior plans at home that seem to be working much better. 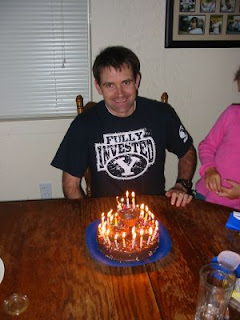 In talking with the kids about Ronny's birthday, the kids each wanted to give him a gift. As this may get a little expensive we discussed options. Charley made Ronny a picture and his own game, Joseph and Sam bought him a giant candy bar, Ben and Sam gave him a Fully Invested BYU shirt, and I gave him Season Two of House. Joseph also decided that because Ronny is a student he should get cupcakes at school like he does. So we made cupcakes and took them into the guys at the office. The kids thought this was great! We then let Ronny choose where we went for dinner, Baja Fresh, and then got the kids hamburgers as they don't quite appreciate Mexican food yet. We brought dinner home and then lit the candles on the cake and sang to him. It was a long, but great day for our family!