Another Trip to the ER 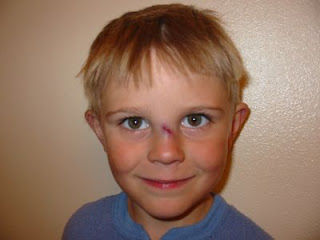 Joseph had the fortune of making another appearance at the Emergency Room today. The kids were having a pillow fight while Ronny and I were making dinner. In all the excitement Sam picked up one of the Thomas the Train towers and clocked Joseph right between the eyes. It left a deep enough slice that we thought he should be checked out. Five minutes after arriving a 16 year old boy walked in with a similar cut on his nose, he however fell out of a tree to earn his scar. 30 minutes later Joseph and the other kid both had their faces super-glued back together.

While waiting to fill out paper work Joseph's nurse took him outside to watch the helicopter landing and then gave him a Teddy Bear to keep. While waiting for the numbing gel to work we watched the Beavers play for the National Championship once again. We came home just in time to see them win. Joseph has decided to name his bear "Darwin" after the Beavers short stop. Joseph was kind enough to share his stickers with his siblings and is doing well. He has even forgiven Sam although he likes to remind him about the trip to the hospital every chance he gets. And we thought it was just going to be a quiet Sunday afternoon.

Earlier this week I came down with the flu. Ronny of course had a big conference this week so he wasn't home much. However I was grateful to at least have him in town. The kids are happy he is home for bed time. They have informed me he tells better scripture stories. I am happy he is home to tell them. Ahh, what a day to end quite a week!

Posted by bjarnason family at 8:12 PM

From the Farm said...

1. Maybe you should just skip Sundays.
2. Wow! Joseph's facial features are changing (aside from the injury).