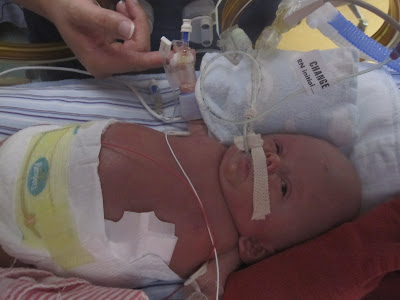 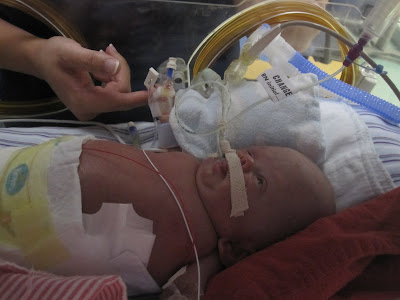 Last night we got a call telling us one of Aaron's picc-lines was going to need to be removed, the double lumen line of course. After karate last night Ronny and I headed up to see what was going on and make some decisions as to whether we wanted them to retry for another picc, try to squeak by on PIV's, or call surgery in for a central line. They had to call in a picc specialist for the procedure. When we arrived the line was still in and we asked what had happened. Apparently when he was given his antibiotic yesterday afternoon a bright red streak appeared going up his leg. The picc-nurse was called and we were called. By the time the picc nurse arrived the streak was gone. They decided to not touch anything and watch it closely. So far that line is still intact, unfortunately his arterial line went bad last night and had to be replaced.

Last night and yesterday day a flood of new babies came into the unit so Aaron once again has a neighbor. Unfortunately he is a twin and his brother is down the hall. I feel bad that the two have been separated and the Mom has to split her time between two rooms. If Aaron wasn't attached to so many machines I would volunteer to have him switch places with one of the twins so they could be together.

Today Aaron's belly is bigger. He also gained 90 grams over 24 hours which looks to be fluid. The hole in his side has now healed over so there is no longer a place for the fluid to drain out. His urine output has also slowed down again. This concerns us a great deal. He also is waking up and looks to be restless and agitated at times. The pharmacist tells me his methadone won't be fully effective until he hits its peak which will be sometime on Monday. They continue to wean the morphine but today they upped his Adavan levels so hopefully that will help. He is a little higher on his FIO2 today (30) so they decided to wait another day to wean his milrinone. I was not too concerned about this as it really depends on the nurse whether she decides to turn it down. His limits are set so high that when it alarms it only alarms for a short time as it will only alarm when he is at 99 or 100. Most of his nurses watch the monitor and if he is consistently at 97 or higher they will turn him down. Today's nurse was only turning him down with the alarm and only if it alarmed for a while.

Aaron doesn't seem to be having any problem digesting his feedings as he is stooling with each diaper and has little or no residual in his belly at each set of "cares". He was moved up to 15 mls (3 teaspoons) last night and continued at that today. He is getting about 75 calories between his TPN and breast milk. The magic number is 80 so we are almost there, hopefully tomorrow. We are hoping that once he is taking in at least 80 calories his body will start to flush the fluid through his renal system. His CRT was 43 this morning and if it drops below 40 tomorrow he will most likely get a transfusion followed by lasiks. Today is also the last day of his antibiotics. 28 days should be sufficient to kill off anything they think may have been growing. We will watch him the next few days to see if this has made a difference. Now that those are off and his TPN gets reduced as his feeds go up we are soon not going to have enough fluid to put through all his lines. We will see which line gets pulled and how long we can keep it off.

Posted by bjarnason family at 4:55 PM

Hanging in there? I have been sickstand have missed the NICU,so I am so thankful for your blog so I can virtually check on you all everyday. I am praying for you Denise, Ronny, and ALL your kids!

. . . he is growing! the picture with you holding his hand helps put his size into perspective. good luck over the next couple of days.

Poor, sweet little puffer fish! He is such a strong boy!