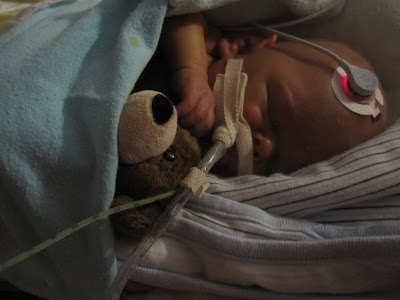 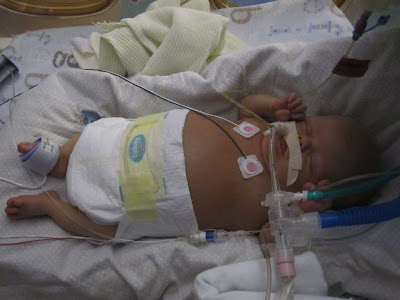 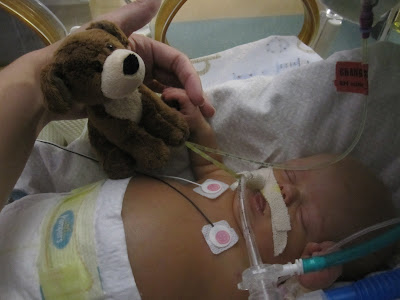 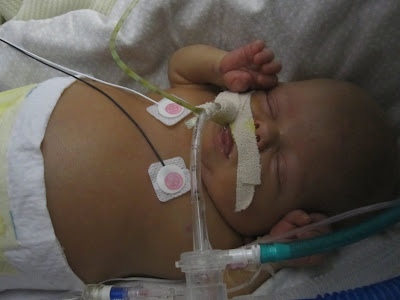 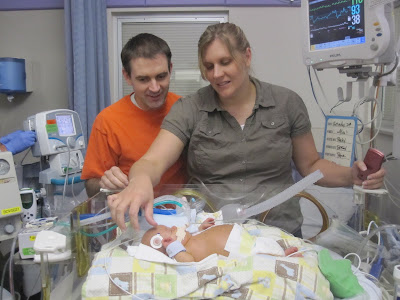 Aaron's initial viral panel came back positive for staph and positive for a gram negative coxi (sp?) yet to be determined. The staph they believe is in his trachea and for now will not be treated. The coxi will hopefully be identified sometime today and they will decide what to do about it then, they are thinking they will most likely give oral antibiotics for that. From the pictures you can see that Aaron's belly is quite distended, mostly from an enlarged liver. Aaron's direct billiruben is very high and his skin is very yellow. Between the prolonged doses of heavy antibiotics in the last 2 months and multiple sepsis episodes his little liver is having a hard time keeping up and is getting backed up. If it fails, the only way to fix things is most likely a transplant, something Aaron may not even be a candidate for at his current age and size.

This week will most likely be the longest week yet, and that is saying something! Aaron will have an extensive echo this morning which will be sent directly to cardio. If he "passes", all left to right shunting, they will schedule him for transport and for his heart cath. We are anticipating that to happen on Tuesday but will know hopefully by the end of the day when everything will play out, the sooner the better at this point.

Ronny and I know that this week is going to be rough and we will need to be at the hospital quite a bit. Sleep has become elusive for me now, I know I need to rest but my body just won't allow it. The kids go back to school this morning. I know this week is going to be difficult for them as well. This is the time I most wish I could split myself in two so that I can be in both places taking care of all my children's needs. We'll just have to figure things out as we go.

Standing in Aaron's room these last couple days I can feel that Heaven is very near. So many times Aaron has stood on the threshold of both Heaven and Earth and weighed his options. We are there yet again. In these next few hours and days we will most likely know which side Aaron has chosen. Things may change rather quickly in the upcoming days so I will most likely not be able to update the blog as quickly as everyone wants, I will do my best as time allows. With all the stress and uncertainty that lies ahead its hard to wrap our heads around the idea it will become more chaotic than what we have done thus far, yet both Ronny and I feel a sense of peace that all will be well. Forward we roll.........

Posted by bjarnason family at 3:51 AM

To every thing there is a season, and a time to every purpose under the heaven . . . experiences happy and disappointing, good and bad, remind us that it isn't our plan or our timeline as we travel though this life. Sending virtual hugs and prayers for continued energy & peace. Keep us in mind if you need help, meals, etc.

My heart aches for you guys. I hope Aaron decides to stay, the Bjarnason household is pretty rockin. :) If he decides to go, you know he is in good hands. I'm so sorry for this up coming week. Those times when you want to split yourself, let the Lord do it for you. Let Him fill in the gaps. Prayers continue for your family.

What can I say? We love you. Know that whatever Aaron decides it is right. You and your family have been amazing and that will continue! You know there is the saying that home is a little of heaven here on earth? Well if Aaron goes, then you will have a little bit of home in heaven waiting for you! He has a mission and he has fulfilled the most important part of that mission. He came! We love you!

well denise, it's a blessing as a mother that you can be so in touch with the Spirit and Aaron's spirit at this time to know that heaven is near and what a blessing eternal families are. we love you, you're in our prayers and we pray the Spirit will continue its string presence with your family at this time! Lots of love.

He is a very special boy and if he decides to go it is because he has a greater calling in heaven and he has already done his calling here on earth. That doesn't make it easy in anyway and my heart aches for your little family. I hope you can find comfort during this hard time and try to remember God doesn't make mistakes. If Aaron decides to leave this earth, he is needed in heaven for a much greater mission. Rejoice in knowing you will see him again one day. We love you and our hearts and prayers are with you!
XOXO,
Amanda

I am thinking of you both lots today. You...and all of your extended family members...are in our prayers. We love the Bjarnason's. Aaron is blessed to have you all...

Ron and Denise,
I just wanted to let you know that I am currently 26+2 weeks pregnant. I suffered from CHI in my previous pregnancy and lost my twins at 25+2 weeks. This time the baby is weighing at just over 400gm and they want to see how far the pregnancy can take me. Our stories are so similar except that I have no previous children. I wanted to reach out to you and tell you what a wonderful brave family you are and what a miracle Aaron is. I will come back and visit and include Aaron in my prayers. You can visit me here: http://vincenzobenedetto.blogspot.com/