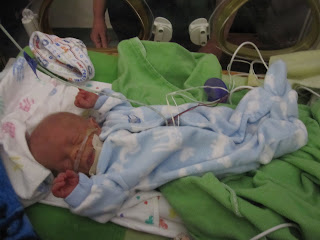 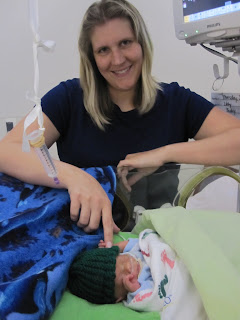 I walked in this morning to find Aaron's top up on his bed and a blanket taped over his head. I asked what was up and the nurse said he was officially starting the open crib process today. (Actually it was sped up significantly because he was getting way too hot!) The original plan was not to dress him as it is difficult to do with all his fractures but I guess that was changed in rounds. As he is still having breathing struggles and fracture struggles he will remain in his isolette with the top up for now. Putting his outfit on was nerve wracking as I didn't want to hurt him. Funny thing about preemie clothes, they are designed for babies at least 4 pounds, we still have a while before he'll fit into them. After he was dressed I held him for about an hour. Aaron was also changed from the water mattress to a memory foam/gel mattress thing. Niether Aaron nor I are too sure of it yet. It seems less comfortable than the water bed. We'll see.

Just as we had him situated in the new mattress the cardiologists came back for a visit. Our N.P. was summoned and we started to talk about Aaron's latest echo. The notes were not in his chart so they all left to the n.p.'s office to talk about what it showed. I was a bit perturbed as I wanted to be part of the discussion. I told the n.p. as much when she came back. The synopsis of the doctor's was this, "Well, we've seen worse." Wow, thanks for that! No changes and another echo in 10 days. I told the n.p. that I was concerned the echo showed no changes, that he still has not come down on his flow, and he has had two Grade 4 A&B's in a week. She said she agreed but we'll remain status quo for now. She said that he could go home taking the viagra, I reminded her that he could not go home on the high flow and that the viagra was supposed to help get him down off his flow and onto straight O2. She nodded. I told her I was not being impatient, just concerned that it wasn't working like they had hoped. I also told her I didn't expect to be going home yet, but I was expecting that we would be making more strides in getting closer to going home and that if felt as if Aaron was in a stall pattern, not getting better, not getting worse. She said she agreed and that my feelings were certainly valid and made a good point. For now we wait and see what happens I guess.

Posted by bjarnason family at 5:55 PM

I have a super dumb question and don't know if you will have time to answer it - but why don't they split or some of those fractures?

He's soooooooooo cute in that little premie outfit! And, I LOVED the picture that nana posted of him with papa's hand!