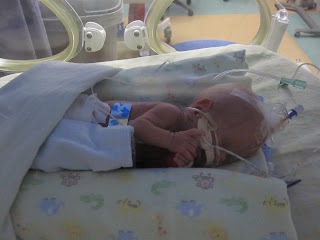 Aaron had a tough day yesterday. He was having a hard time breathing and it seemed the pain killers weren't enough so they ran some blood tests. His white count was normal but his crit came back at 24 (low!) and so they decided to give him another transfusion which means two new IV's. He got 11 cc's yesterday. The most he's been given at one time. They stopped his feeds again but started him at full dose after he was finished. I was also able to hold him last night for the first time this week. When I got him his O2 was at 45 when I put him back it was at 32! When I put him back it always has to be turned up but this time he only went up to 36 and when I called this morning he was at 28. So much better! Changing his diaper is a bit scary as we try not to jostle his broken legs. He was weighed last night and came in at....... 810 grams!!!! He has officially doubled his birth weight! 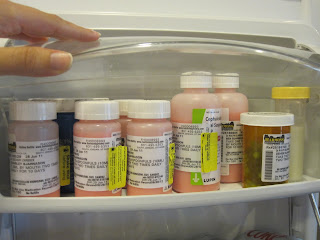 Here's what we have been doing this week, Strep! Isn't there some rule that you are not supposed to get sick the last week of school??? This week has been filled with doctor's appointments and antibiotics! Not fun! I had my 6 week check-up yesterday. Good news, my blood pressure is back to normal so no cardiac follow-up or blood tests! My iron is also good so I don't have to add supplements this time. Hooray for that, they are nasty! Sam had his last surgical follow-up today and is doing great. We said thank you to his surgeon and said we hoped we would not have to see him again! Hopefully by tomorrow the antibiotics will have done their work and we can so swimming, my body is craving some sunshine. 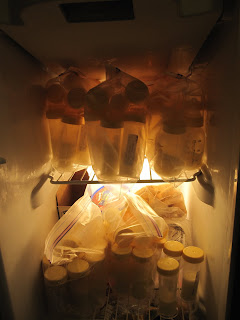 Here's what I also do during the day. Pretty much my day is scheduled around pumping. Aaron at first would take 1/2 of what I would pump in one sitting for the entire day. Now he takes about 2 of the bottles I pump in a sitting for one full day. So, as you can see I'm starting to get quite the supply here at home. Good thing I have an extra freezer in the garage!

Posted by bjarnason family at 9:01 AM

When I walked into the NICU the nurses would moo at me. I was a star lactator.

I can't believe all that you guys have going on! I am so glad you are writing it down because someday you will look back and think, "How on earth did we ever survive that?!"